Mahe, Seychelles/ SEAPRWire / September 21, 2021 /– VYSYN Ventures, a longstanding cryptocurrency venture capital fund, is launching a $30 million fund that will be focused on allocating investments exclusively to the rapidly growing field of blockchain-based gaming. In recent years, VYSYN has allocated significant investments and provided substantial support to a number of gaming-focused projects. 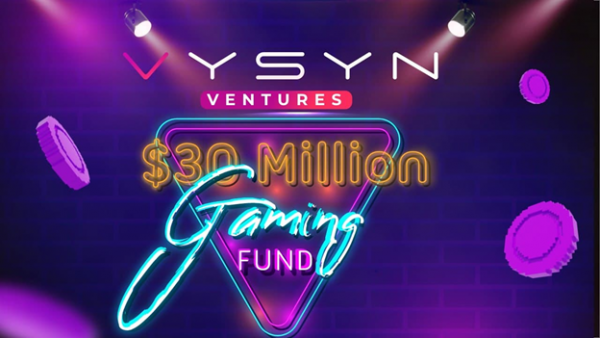 After noticing some recent developments and rising interest in blockchain gaming, VYSYN has committed to ramping up it’s investments and support in the field of decentralized gaming. The fund will be mainly focused on supporting gaming projects that are building on the Polygon Network.

VYSYN has a long history in the world of decentralized gaming and it has held significant long-term positions in blockchain-gaming projects including Ultra, My Neighbor Alice, and Axie Infinity. VYSYN supported Ultra during its seed round of fundraising 2018 and has provided significant support to the project by helping in areas such as marketing and development resources. Ultra has since grown to rank among the top gaming-focused blockchain projects and currently has a market valuation of over $600 million.

Similarly, VYSYN provided significant support to My Neighbor Alice at an early stage by investing during the private sale fundraising round. VYSYN has also been a significant investor in Axie Infinity, the largest blockchain-based gaming project and pioneer of the play-to-earn movement. After noticing the vast potential of Axie Infinity and the earning potential it offered to netizens worldwide, VYSYN strategically built a considerable position in the AXS token by accumulating large amounts on the open market. Due to these acquisitions and the subsequent appreciation and success of Axie Infinity, AXS still represents a significant portion of VYSYN Ventures overall portfolio.

VYSYN Ventures anticipates that decentralized gaming will be the next major and sustainable trend in the blockchain industry. Decentralized finance experienced exponential growth in 2020 as it offered users lucrative earning opportunities through participation in decentralized credit markets. Throughout 2020, the total-value locked in DeFi grew by a factor of roughly thirty and has continued to grow to even greater multiples in 2021. Similarly, blockchain-based gaming is offering lucrative earning potential to blockchain users worldwide and is also relevant to a much wider audience. The total number of Web3 wallet addresses associated with the Defi space is roughly 3 million. However, the number of gamers worldwide is over 2 billion and a growing share of these are transitioning into the world of decentralized gaming as they recognize the vast earning potential the space offers.

“The blockchain industry is on the precipice of a major shift. Increasing amounts of value and attention are turning to decentralized gaming as the field innovates and offers more and more opportunities for internet users worldwide. This is particularly evident in the growing play-to-earn movement, which is offering lucrative and sustainable earning opportunities to anyone with an internet connection. VYSYN Ventures anticipates that blockchain gaming will grow exponentially in the coming years and we are establishing the $30 million gaming-focused fund to strategically allocate to this area.” – KVESTOR, VYSYN Ventures CEO

The $30 million fund will primarily support gaming projects that are utilizing the Polygon Network as their underlying structure. The Polygon Network offers a low-cost high-throughput settlement layer that is hosting a growing share of cutting-edge decentralized applications. VYSYN has worked closely with the Polygon team in supporting several previous projects and has never ceased to be amazed at the professionalism and skill of the Polygon team. VYSYN wishes to strengthen their collaborative efforts with the Polygon team. For this reason, the fund will mainly support gaming projects that are deploying their technology on Polygon. However, the fund will not be limited exclusively to Polygon and disruptive projects utilizing other chains may also warrant support.

Any prospective gaming projects that need comprehensive support and investment can reach out to the fund by emailing hello@vysyn.io. The VYSYN Gaming fund will provide versatile support in areas such as funding, marketing assistance, and connections to entities such as industry influencers and exchanges. VYSYN Ventures foresees the growth in blockchain-based gaming vastly outpacing other blockchain niches in the coming years and it is positioning itself to be a major investor in this field with the launch of this initiative.

The article is provided by a third-party content provider. SEAPRWire ( www.seaprwire.com ) makes no warranties or representations in connection therewith. Any questions, please contact cs/at/SEAPRWire.com